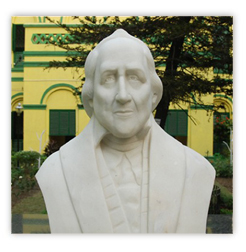 An extremely intelligent man, Archdeacon John Henry Pratt was keen on educating the girl child. Legend has it that while walking towards St. James’ Church one morning, he came upon a few girls playing on the road.

Pratt was the second son of Josiah Pratt and Elizabeth nee Jowett. He was baptized on 30 June 1809 at St Mary Woolnoth. His early schooling was at Oakham school. He then went to Caius College, Cambridge. He graduated B.A., third wrangler in the Mathematical Tripos 1833, was elected to a fellowship, and proceeded M.A. in 1836. For a while he stayed at Cambridge and gave private tuitions.  While at Cambridge he wrote a book called Mathematical Principles of Mechanical Philosophy (1836, second edition 1845) which described mathematical applications in gravitationalphysics.pp

Pratt was appointed a chaplain of the East India Company through his father’s influence on Bishop Daniel Wilson in 1838. He became Wilson’s domestic chaplain, and in 1850 was appointed Archdeacon of Calcutta. The leisure allowed during his position in India allowed him to pursue mathematics[4] although he noted that it was difficult to work alone and led to long exchanges in the journals of learned societies in Britain. When Bishop Wilson died in 1858, he was nominated for the position of Bishop. He was approved with the influence of Lord Shaftesbury on Lord Palmerston but it was shortly after decided in the wake of the 1857 uprising that no appointee known for missionary work should be appointed. The chosen appointee was instead Bishop Cotton. They held each other in high esteem. In 1864 an order was passed by the Secretary of State in India to retire chaplains after twenty-five years (earlier unlimited). An exception was made for Pratt and he was extended from October 1867 to March 1869 based on pleas from Bishop Cotton. When Pratt wished to resign in 1869, the Secretary of State extended his service to October, 1872. After the death of Bishop Cotton in 1866, Pratt started a Hill Schools’ Nomination Endowment Fund to help support Bishop Cotton’s scheme of starting schools in the pleasant climate of the hills for the benefit of the children of poorer English residents in India who could not afford an education in England. Pratt married Hannah Maria Brown, daughter of George Francis Brown, a Bengal Civil Servant, at Bhagalpur on 6 March 1854. He was elected Fellow of the Royal Society in 1866 He died from cholera when he was on a visit to Ghazipur, India, on 28 December 1871. At the instigation of Bishop Robert Milman, a memorial to Pratt was erected in St. Paul’s Cathedral, Calcutta and a girl’s school which he had patronized in the vicinity of St. James’ Church, Calcutta, be named in his memory.